Ex-NFL star Zac Stacy is a wanted man for assaulting his ex-girlfriend. Former National Football League (NFL) running back Zac Stacy was caught on CCTV brutalising his former girlfriend in front of their five-month-old toddler.

The viral footage surfaced on social media and spread like wildfire. As reported by TMZ Sports, Stacy’s attack on his former partner Kristin Evans took place at her home in Florida, on Saturday 13 November 2021.

The short clip shows moments where Stacy, a towering figure, grabbed Evans and flung her across the room, where she slammed into a TV. Laying on her back and completely defenceless against her former boyfriend’s brute strength, Evans could only plead for Stacy to calm down.

However, this seems to have only aggravated the situation and the video clip ends as the former running back is seen swinging punches at Evans’ head.

This happened to my best friend Kristin in front of their child. Now that a federal warrant has been issued, she feels safe sharing this. #ZacStacy is on the run from Florida in Nashville, TN. Please expose this monster and help catch him pt 3 pic.twitter.com/ZWCYsrB1m1

Who is Zac Stacy?

Fortunately, Evans survived the ordeal and contacted authorities but by then, Stacy had left the premises.

His former girlfriend, it’s understood, has filed a restraining order against the running back who, at the time this article was published, was not arrested nor charged with any crime.

His big break in the American football came in 2013 when he was drafted by the St Louis Rams in the fifth round of that year’s NLF Draft. Stacy has also played for the New York Jets in 2015 but since then, his career has hit a screeching halt.

It’s understood that Stacy is wanted by Florida police in connection with the assault of his former girlfriend. 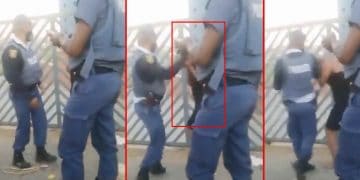