Boris could not be bothered to maintain decorum at a bilateral meeting with Ramaphosa. 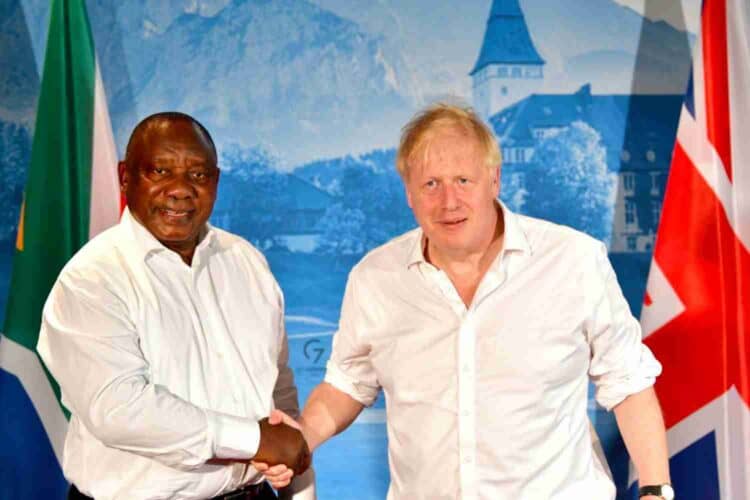 United Kingdom Prime Minister Boris Johnson was the subject of cackles and groans on social media when he showed up to his bilateral meet-up with President Cyril Ramaphosa dressed in a barely-tucked and wrinkled shirt and sagging trousers.

South Africa’s president, who much like his British counterpart, faces immense pressure and scrutiny over allegations of corruption and, much worse, money laundering, has been on a work trip in Schloss Elmau, Bavaria, where this year’s G7 Leaders Summit is held.

Leaving the problems of his home country behind — Stage 6 loadshedding is a high probability on Tuesday — Ramaphosa rubbed shoulders with world leaders at a climate and energy luncheon, shaking hands for photo ops with the president of the European Union (EU) Charles Michel, Japan Prime Minister Fumio Kishida, and the Federal Republic of Germany’s Chancellor Olaf Scholz.

South Africa’s president also held bilateral talks with former Commonwealth compatriot, UK’s prime minister Johnson. While for Ramaphosa, this was an opportune meeting that may benefit South Africa in its green energy endeavours, South Africans on social media were far from pleased with the British prime minister’s decorum — or lack thereof.

In this viral video footage posted by Ramaphosa’s spokesperson Athi Geleba, Johnson’s ‘eccentric’ behaviour, turning up to a high-level political meet-up in an untucked shirt and saggy pants, raised eyebrows, with most commenters suggesting that, perhaps, the prime minister had indulged in a pint or two.

Here are some of the reactions to the viral video clip:

Boris is definitely looking like he's just been playing football during break and needed to rush to 4th period. https://t.co/Dn8XrVwScn

Why does Boris look like he’s at the Baron Fredman Drive at 8pm on a Friday https://t.co/XngKhI1ye9

Lol Boris couldn’t even be bothered to dress up for the occasion. https://t.co/VxZkfyyhBY

Boris looks like he just came back from groove. 😂 https://t.co/zPkr0WhmlC