KZN floods: Here’s how SA responded to the disaster

The rescue operation has seen over 4 800 personnel deployed to the province to assist in emergency relief efforts. 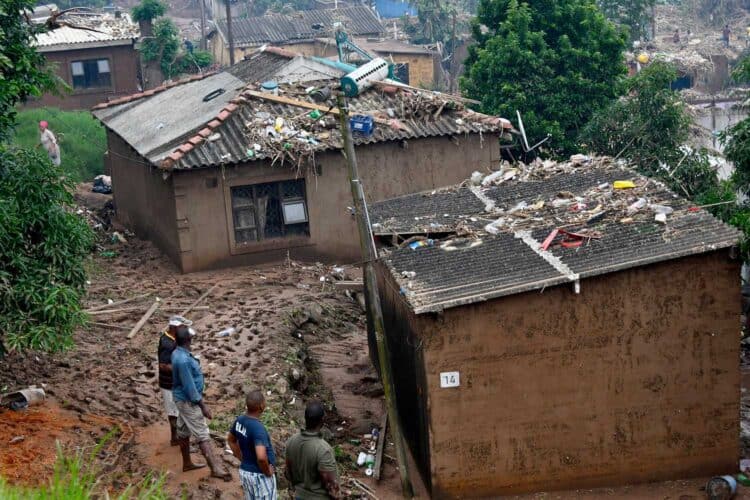 The Justice, Crime Prevention and Security (JCPS) Cluster says it continues to assess the extent of the damage and the required intervention in flood-ravaged areas of KwaZulu-Natal.

This, said Police Minister Bheki Cele at a briefing on Thursday, was before the cluster committed specialised capabilities and equipment to bolster search and rescue efforts, restore damaged infrastructure and extend services to affected communities.

President Cyril Ramaphosa declared a National State of Disaster after the inclement weather caused extensive damage in KZN and in the Eastern Cape.

Speaking on behalf of the JCPS, Cele said the cluster remains “vigilant and ready to respond” in the provinces of the Free State, Limpopo and North West where possible flooding is forecast.

A consolidated government response has resulted in the safe evacuation of hundreds of people in distress, saving lives and retrieving bodies lost in last week’s torrential rain in KwaZulu-Natal.

The State is leading relief and rescue efforts, providing humanitarian aid and consolidating plans towards the reconstruction and rebuilding of communities.

Said Cele: “We commend all State emergency services and other State organs for responding promptly to the unfolding humanitarian disaster.

“Working together with sectors of society and the rest of government, we are walking this painful path with the people of KZN to lift this heavy burden off their shoulders.”

The rescue operation has seen over 4 800 personnel deployed to the province to assist in emergency relief efforts.

These teams are supported by over 900 KZN metro police personnel.

Cele said Visible Policing and Public Order Police have been deployed to maintain law and order and prevent opportunistic crimes at identified areas in communities and business centres. These include Umlazi, KwaMashu, Pinetown and the Durban CBD and surroundings.

“Key national routes are also being monitored closely. Detectives in this regard are assisting in the finalisation of inquest cases opened for all the disaster victims,” said the Minister.

He said the Intelligence Coordinating Committee was continuously updating law enforcement in terms of the security situation in the province.

A search and rescue unit, consisting of both the SAPS and eThekwini Metro Police, is responsible for the rescuing of victims, searching of victims in dams and rivers to retrieve bodies.

The Minister said the search and rescue team is made up of over 50 experienced SAPS divers and 17 search and rescue K9. Twenty-one vessels, such as boats and rafts, have also been roped in to assist in the operations.

Nine aircraft from both the SAPS and South African National Defence Force (SANDF) were also used during the operations.

Cele announced that the number of deaths caused by the floods has been revised down to 435 after post mortems determined that 13 other deaths were not as a result of the natural disaster.

“There was a figure of 448 fatalities, which has now been revised down to 435.

“This is as a result of autopsies performed on four bodies and it was determined that the deaths were murder related, as they were found with bullet wounds. Three of the [dead] are from Pinetown and one from Sydenham.

“Nine more people were determined to have died from natural causes, which were not related to the disaster. The final fatality figure stands at 435 as of this morning,” he said.

Additionally, there is an unconfirmed number of people still unaccounted for.

On Friday, SAPS will lay to rest Sergeant Busisiwe Mjwara in Pietermaritzburg. The search and rescue officer lost her life while performing operations in which K9 “Leah” also perished while trying to save the deceased member.

The JCPS commended the courageous efforts by all those involved in the rescue missions.

“The role of communities is important and can never be under estimated. South Africans continue to demonstrate ubuntu in the most challenging of circumstances. We are appealing for patience and cooperation as intervention efforts unfold,” the cluster said.