Julius Malema made it clear the time has come to give Ramaphosa the 'Zuma treatment'. 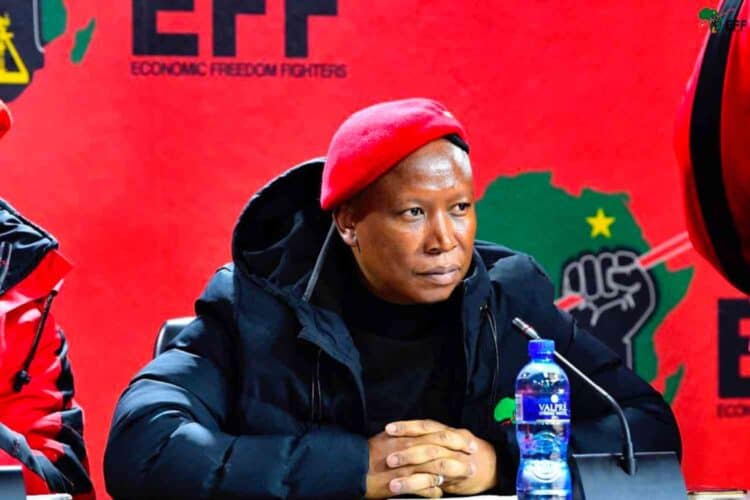 EFF leader Julius Malema drew a line in the sand against President Cyril Ramaphosa at the party’s presser, on Tuesday.

Malema gives Ramaphosa ultimatinum: ‘Step down or face my wrath’

The charged media conference comes days after former corrections commissioner Arthur Fraser sent shockwaves across the political arena when, in a statement, he noted his decision to file a criminal case against the president for money laundering, theft, bribery and defeating the ends of justice.

According to Fraser, an amount of $4 million (est. R61.5 million) was stolen from Ramaphosa’s Phala Phala game farm and, instead of reporting the matter to authorities, the president, back in February 2020, allegedly took matters upon himself to have the matter dealt with under wraps.

“I also trust that the President will take the nation into his confidence and accept or deny that the events i describe in my affivadit occurred on his property,” Fraser said.

Sure enough, toward the end of his address at the Limpopo ANC conference on Sunday, 5 June 2022, Ramaphosa responded to the allegations, shooting them down wholly as the latest politically motivated smear campaign he’s had to endure.

Careful to not talk himself into a quagmire, the president affirmed his claim of innocence, vehemently denying his involvement “in any criminal conduct.”

“Now, due to the investigation, I will not really be able to engage deeply or further on this matter, as which should allow the due process to take place. However, I would like to say that I’m a farmer. I’m in the cattle business and the game business and through that business which has been declared in Parliament and all over, I buy and I sell animals.

Getting to the $4 million theft claim, Ramaphosa rubbished this as a ‘barbaric’ accusation.

“The amount involved is far less than what has been bandied in the press…barbaric $4 million and so forth. I want to say it’s far less than some are casting aspersions about me and money,” he added.

While Ramaphosa’s response was welcomed with warm applause by his fellow party comrades, opposition parties, particularly the EFF — have mobilised efforts to force the president into resignation.

At a press briefing, Malema outrightly condemned Ramaphosa’s links to criminal activity. The EFF leader charged at SARS and the police for not taking proactive action against the president, and at judges and religious leaders for not contributing thoughts to the discourse.

[MUST WATCH 1/2]: Slideshow of the pictures of the detainment of the suspects in the burglary on Phala Phala Farm, owned by Cyril Ramaphosa, identity documents, cars purchased with the money which was take and relevant picture evidence. #RamaphosaMustGo pic.twitter.com/Z4Jtp6DkaI

“The EFF therefore calls for Ramaphosa to step aside with immediate effect, because no policeman will investigate a sitting President who has violated laws in order to avoid justice,” Malema exclaimed.

He also confirmed that Advocate Tembeka Ngcukaitobi has been deployed on a research effort to “look into constitutional provisions to have Ramaphosa step aside.”