The people were far from amused by the two-faced display shown by South Africa. 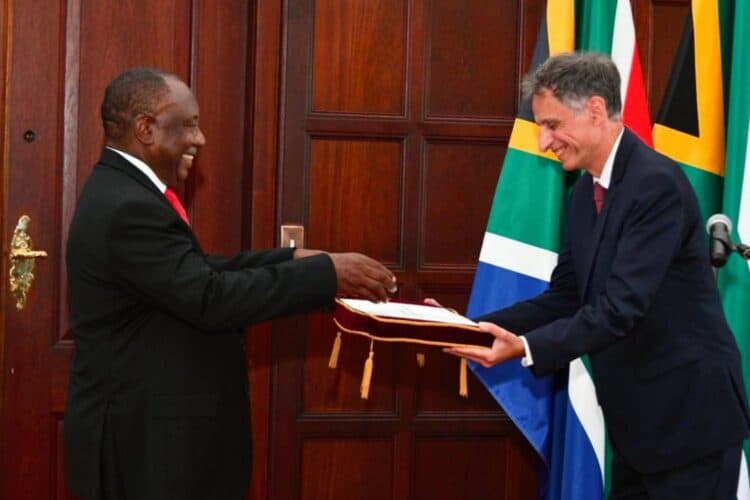 President Cyril Ramaphosa drew ire on social media when it was announced, on Tuesday, that he was to receive a letter of credence from the State of Israel.

Ramaphosa showered with letters of credence

The president received letters of credence from “13 Heads of Mission-Designate who have arrived in South Africa to serve in diplomatic missions in South Africa.”

The letter is basically a formal introduction made between a head of state and a diplomatic ambassador of an ally.

Ramaphosa was formally introduced to 13 diplomats from countries like the Republic of Congo, Romania, Cuba, Malawi, among others.

However, the outrage came when Ramaphosa accepted a letter of credence from Israel ambassador Eliav Belotsercovsky.

H.E President Cyril Ramaphosa receives a Letter of Credence from the Ambassador of the State of Israel, His Excellency Mr Eliav Belotsercovsky.#CredentialsCeremony #SAIsraelRelations pic.twitter.com/v2rhW5keIa

The hypocrisy of maintaining normal diplomatic relations with the abnormal apartheid state of Israel is belied this very same government urging Miss South Africa to boycott attending Miss World in Israel because it's an apartheid state. https://t.co/xE2HQy5d72

Didn't u guys say u not going to support Miss SA cause she was attending a competition held in that country? What kind of retarded hypocrisy is this thou? So only government is allowed to be buddy buddy with Israel?🤦🤦🤦🤦🙄🙄🙄we are led buy thugs Indeed pic.twitter.com/QQ4rwfIscv

I don't understand how the government just a couple months ago boycotted the beauty pageant held in Israel and now all of a sudden welcomes them????? https://t.co/z2RxV2QNWy

South Africans have long called for the government to distance itself from Israel, a country globally condemned for its treatment of Palestinians.

For the presidency, the relationship between South Africa and Israel has been awkward, to say the least. While, on many occasions, South Africa has spoken out against Israel’s war against Palestine, no decisive action has ever been taken to disassociate from a government that re-established control of an area of land through mass murder.

Perhaps, the greatest irony that drew the most ire from social media came when Ramaphosa was pictured with Ambassador Belotsercovsky, a month or so after his government denounced Miss South Africa Lalela Mswane’s participation at the Miss Universe pageant.

Reacting to the outrage, the Department of International Relations (DIRCO) issued a statement, stating that, more than anything, South Africa’s position is neither for nor against Israel.

“South Africa has maintained diplomatic relations with the State of Israel, whilst at the same time unwavering in our principled support for the struggle of the Palestinian people for self determination.

“South Africa remains in favour of a two-state solution with the peoples of Palestine and Israel existing peacefully side-by-side inline with June 4, 1967 borders,” the statement read.

South Africa has maintained diplomatic relations with the State of Israel, whilst at the same time unwavering in our principled support for the struggle of the Palestinian people for self determination. @PresidencyZA @GovernmentZA @AthiGeleba @UbuntuRadioZA pic.twitter.com/KAIIj6HBGA

As expected, the message was not well-received.

Here are some of the reactions that followed:

Such a poor PR statement, all I am seeing here is the DIRCO PR team saving face for Ramaphosa and throwing all other presidents in it. "if Mbeki did it, why can't Ramaphosa do it?" https://t.co/H0fCGFHMMo

Committed to fighting corruption while hiding it

This is the ANC’s policy posture on everything. Literally! https://t.co/USiOSo1Zjm