Camaryn Swanson posted pictures of her bruised face. The ex-girlfriend claims Tyga beat her up. 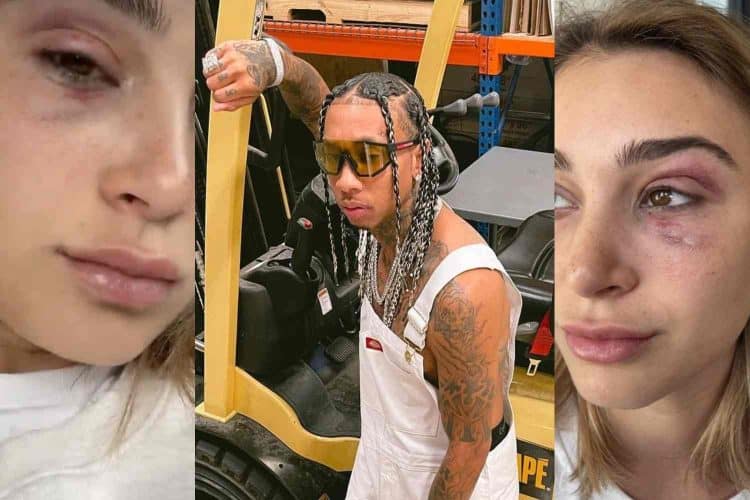 Cameron Swanson sent social media into a raucous when she posted images of her battered face, claiming that she was beaten up by Young Money rapper Tyga.

What happened to Camaryn Swanson?

According to reports, Swanson, a former girlfriend of Tyga, showed up outside the rapper’s Los Angeles home in the wee hours of Monday morning, seemingly under the influence.

Insiders who’ve spoken to TMZ claim Swanson was let inside the house by Tyga who attempted to de-escalate his irate former lover. However, photos and text message leaks posted by Swanson seem to paint a different picture.

According to the message exchange between the couple, Tyga had apparently sent a car over to Swanson’s home at approximately 03:00. This disproves claims that the influencer had shown up unannounced.

At this stage, it remains unclear what prompted the bout of fisticuffs but based on images shared by Swanson on social media, she received the hardest blows.

“I’m so embarrassed and ashamed it had to get to this but I have to stand up for myself,” Swanson wrote on her Instagram Story.

Since the allegations surfaced on social media, Tyga has gone dark. The rapper is said to have refused to cooperate with police who responded to the scene of the alleged assault. However, from what we understand, the Taste rapper has agreed to hand himself over to the Los Angeles Police Department (LAPD) where he will be given an opportunity to tell his side of the story.

At the time this article was published, no reports of Tyga being charged with any crime had surfaced.

Here’s how social media reacted to the news:

Tyga really beat Camaryn Swanson?? She’s the baddest and purest hun around. He should be jailed and the keys thrown away.

Tyga allegedly beat up his ex-GF, Camaryn Swanson, after supposedly being asked to come to his house, this past weekend. If he did do this, he needs to be arrested and charged by LAPD ASAP. I have more info on @HipHopVibe1. https://t.co/QP8F16Xn2Q

tyga did this to his gurl…im so sorry for her and every girl that is going through all this stuff. ladies i know you might love your partner to the fullest but don’t let abuse you… never pic.twitter.com/QzYwjm19Il

Tyga puts his hands on a woman and the first people to victims shame and defend tyga are black women? A man who wouldn’t even let y’all in his section if y’all asked?…. pic.twitter.com/mvwlNuVRJc