Home » News » Watch: Nota blasts Mihlali Ndamase as unattractive ‘object’: ‘You can kill her if you want to’ [video] 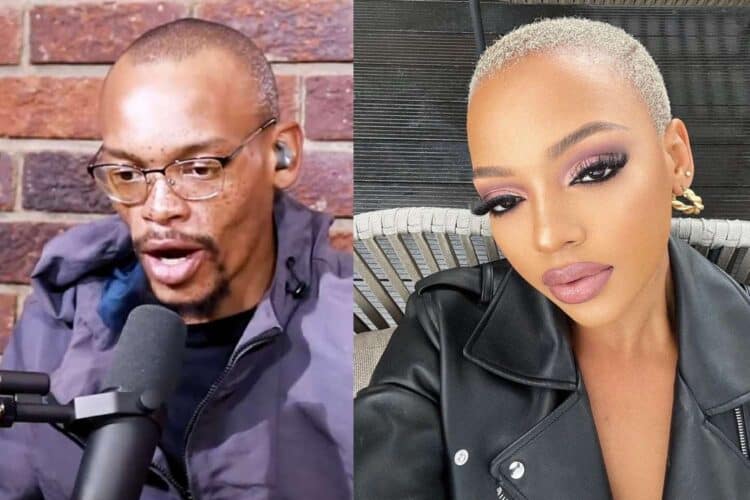 Notorious entertainment pundit Nota Baloyi drew ire from social media when he made these disturbing comments about cosmetics influencer and businesswoman Mihlali Ndamase.

Kwesta‘s former business partner appeared on the latest episode of the Nkululeko N Culture podcast and before the discussion could advance to interesting themes, like his failed business dealings with the Ngudu rapper, the two men, Nota and Nkululeko, shared interesting views about black women in South Africa.

Not only did Nota blast Ayanda Thabethe as a home wrecker, suggesting the influencer was pregnant by a married man, the controversial pundit categorically labelled Ndamase an ‘object’ one can buy, and “kill her if you want to.”

“The Mihlali’s of this world. I mean, like, imagine… Like, imagine there’s some guys who think that Mihlali is attractive, and all I think is that [I can buy her]. They don’t understand that if Mihlali’s for sale, that means she’s an object, which means you can kill her if you want to,” Nota nonchalantly claimed.

The controversial pundit dug deeper and likened a relationship with Ndamase to “buying a dog”.

Here’s the clip where Nota goes on a rant about killing Ndamase.

Is Mihlali not attractive? 🤔

"If Mihlali is FOR SALE that means she is an object, which means you can kill her if you want to…" 😲😲😲https://t.co/qUceJxVOPl
Ndlozi Riky Raij Durban July Buhle Nigerians Telles #PhalaPhalaGateFarm pic.twitter.com/40V31gQ501

Nkululeko did his best to try and save the bizarre moment, albeit failing dismally, by suggesting Karabo Mokoena’s death was the consequence of her vices.

Of course, Mokoena, a 22-year-old from Johannesburg, was stabbed to death, doused with acid and burned by her boyfriend Sandile Mantsoe in April 2017, who later confessed to sacrificing the woman in a ritualistic practice that was meant to bring him financial gain.

Clips of Nota’s comments, particularly about Ndamase, surfaced on social media, and immediately, the influencer’s hive, and generally, women who were disturbed with the repulsive misogyny that permeated from that episode, launched a scathing attack on the ex-RapLyf executive.

Here are some of the reactions:

Hating on baddies is a low selfesteem thing , why would you dedicate your life to hating uncle waffles and mihlali ? 😭

How do you even think it’s okay to objectify Mihlali (and by extension, women) and even go as far as saying you can k*ll her as you would a dog? Some men are just so messed up and disgusting. It’s beyond me.

Every other day there’s a South African sitting at a podcast, wishing harm on Mihlali or fantasizing about her dying in the most gruesome manner.

Surely this is an illness. Cos no ways…

Nota crossed the line man, that's fucked up. justifying the murder of women in a country with so much GBV ? that episode should be taken down, can mihlali sue him?💔

South Africa has a serious incel problem. In a country with some of the highest gbv and rape stats in the world, if you don’t see anything wrong with the way this weirdo is talking about Mihlali, you’re probably part of the problem. https://t.co/CRsIZrOHZG