Gauteng will be struck by vicious flash floods this weekend and motorists are warned to take extreme precautions on the road. 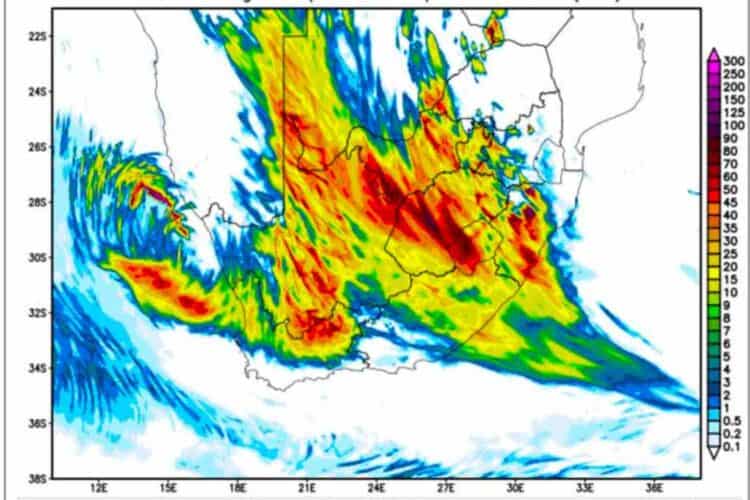 Gauteng flash floods could pose a serious threat to residents in low-lying areas of the province, the South African Weather Service (SAWS) warned.

In a statement, the weather authority warned motorists to avoid, as much as possible, driving this weekend due to “a potential risk of road flooding.”

“On a broader scale, residents in Gauteng, Mpumalanga, the Free State and North West as well as the northern areas of KwaZulu-Natal (KZN), the Eastern and Western Cape should be aware of the risk of flash-flooding, especially in low-lying areas,” the statement read.

The torrential weather that brought hail and thunderstorms to regions of Gauteng this week will not lose any momentum coming into the weekend.

The persistent cut-off low pressure system is expected to bring showers to the far eastern parts of Vhembe and Mopani district municipalities in Limpopo, low-lying areas over the eastern Free State, the southern half of North West, the midlands and northern areas of KZN, Mpumalanga and Gauteng.

“The residents of informal settlements, especially those located along river basins, are advised to take care, as such dwellings could be exposed to flooding. Disaster Management practitioners are also advised that some communities in the above-mentioned areas could become displaced and require emergency shelter,” SAWS warned.

The torrential system, it’s believed, will likely travel towards the eastern and western coastline of South Africa, bringing moderate-to-severe thunderstorms to parts of the Western Cape, “eastern areas of the Northern Cape as well as the western parts of the Free State and North West provinces.”

Driving this weekend will be a high-risk affair, says SAWS. Wet conditions met with harsh winds will most likely obstruct motorists “due to poor visibility and slippery roads.”

“Moreover, extra care should be taken when negotiating bridges and low-water crossings known to be susceptible to flash-flooding. Other thunderstorm-related hazards include the risk of large amounts of small hail which may cause damage to vehicles and infrastructure. Added to which, strong winds may result in difficulty in navigation at sea with short-term disruptions of small harbours and ports between Cape Columbine and Cape Agulhas on Saturday,” SAWS added.

Gauteng should see the last of the cut-off low by Sunday, with the system expected to shift towards the south-eastern parts of the country between then and Monday 6 December 2021.