Reports of unrest at a taxi rank in Korsten suggest that fed-up Somalians are fighting back. 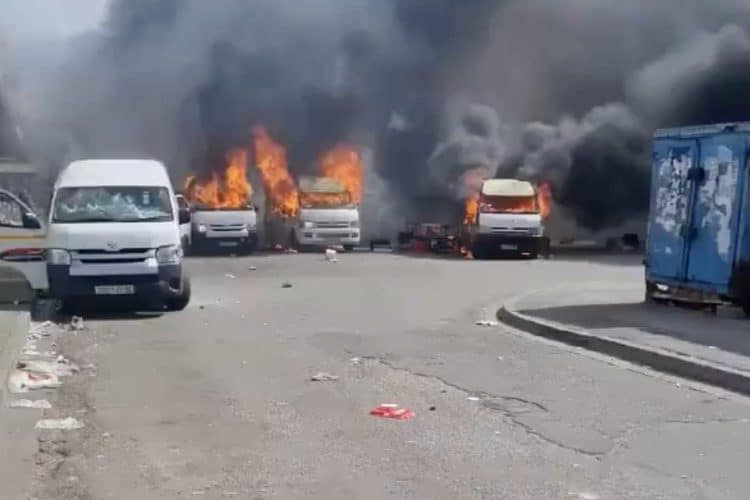 Tensions are palpable in Korsten, Gqeberha, as reports surface of a clash between Somalian nationals and taxi drivers.

Video footage of the scenes playing out on the busy Durban Road surfaced on social media, showing a number of taxis engulfed in fire. Onlookers watch on in horror as “Allahu Akbar” chants could be heard coming from the person filming the inferno.

While authorities have yet to come forward with information on what caused the fire, it is reported that the taxis from the Korsten transit station were targeted by Somalians.

Here are video clips of the unrest:

Are Somalians behind the Korsten taxi arson?

Details around the taxi arson are still very sketchy. However, a case could be made for the allegations tying the attack to a Somali fight-back.

Spaza shop owners in the region have, for a long time, suffered in silence. The small community of Somali businessmen and women have been the targets of xenophobic riots and robberies.

In February 2021, four Somalian nationals were gunned down in different areas of the Nelson Mandela Bay metro in one weekend. At the time, Korsten police had released a statement confirming the killings.

“Two people were shot dead in their shop in Vuku Street in New Brighton on Friday. It is alleged that at about 7:30pm, the two victims aged between 23 and 25 years old were inside the shop when two suspects entered and shot both of them. One victim passed away at the scene while the other passed away on the way to hospital. Groceries, cigarettes and cash were taken,” police spokesperson Priscilla Naidu confirmed.

Following the killings, Said Mohamed, who chairs the Somalian Association, led a protest on Durban Road calling for an end to the targeted attacks.

“The thugs easily block our roads and rob our stock worth thousands of rands when we cross over the speed humps. Ten of our vehicles have not been recovered and no suspects have been arrested. These thugs demand between R1,000 and R2,000 a month per shop. They are well known, but police are not doing anything about them.

“We are not here to take anyone’s job. Ours is to do business and create jobs for the needy. We have been assisting the poor families with burials and food parcels. But now we are killed like animals. We demand the same protection from police because we are also Africans,” he said at the time.

It remains unclear, at this juncture, if the attacks on the Korsten taxi rank is, in any way, linked to a Somali revolt