The pilot and his student were rescued by the Cape Town metro police's swift response. 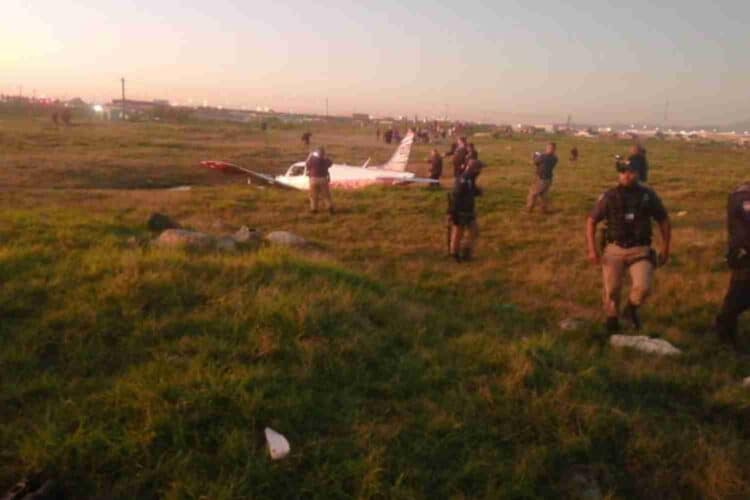 A pilot and his student will have law enforcement officials to thank for their swift response in clearing the scene where they’d pulled off an emergency crash-landing in Lower Crossroads, one of Cape Town’s deadliest township, on Tuesday evening.

Everything about the ordeal faced by the pilot and his student was a recipe for doom. As reported by News24, the pilot had taken off from an aviation school and in the midst of a training flight, the light aircraft’s engine failed.

In a statement, City of Cape Town EMS spokesperson Eckardt Winks confirmed the pilot used his experience to save his and the student’s life and pulled off an emergency crash-landing.

The pilot’s last-ditch decision was a lifesaver. Except, what he may have not anticipated was landing in one of the most dangerous townships situated at the periphery of eastern Cape Town.

It was around 18:00, the worst time for an outsider to find themselves stranded in Lower Crossroads, and sure enough, everything the pilot and his student may have heard about the ‘hood’ unravelled while they waited impatiently for help to arrive.

According to Winks, very quickly, Lower Crossroads residents gathered at the crash scene, amazed by the uncommon sight, but very soon thereafter, an element of criminality invaded the spectacle.

“A crowd quickly gathered around the plane. The pilot radioed air traffic, calling for urgent assistance, complaining that they were being robbed of their personal belongings, and the aircraft looted,” Winks revealed.

The frenzy was caught on camera by eyewitnesses who filmed the crowd looking and touching around inside the light aircraft.

Fortunately, Cape Town metro police arrived at the scene right on time to secure the area.

“They managed to secure the area, followed by the arrival of our law enforcement and traffic services. Fire and rescue services dispatched motor pumps and a water tanker,” Winks added.

The pilot and his student were successfully removed from the scene and taken to a nearby facility for a medical checkup.

1/3Two pilots are like to be alive after light plane that they were flying in crash-landed in Luzuko, in Lower Crossroads on Tuesday 28 June evening. The City of Cape Town MMC for Safety and Security says Metro cops and Law Enforcement responded to the scene after they received a pic.twitter.com/D8bHgfPe01